THE ESSENCE OF TONALITY / THE PARSIFAL CHRIST-EXPERIENCE

Hermann Beckh - Trans. by A. Stott & A. Strauss 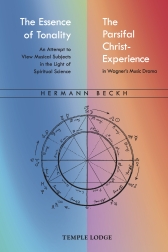 The unique scholarship and artistic sensitivity of Prof. Dr Hermann Beckh (1875–1937) is in the process of being rediscovered. The great linguist, Orientalist and Christian priest – an active music-lover who also composed – penned pioneer works on our musical system that are respected by musicians and musicologists. This volume brings together two revised versions of his best-loved books.

The Essence of Tonality is written ‘…for musicians and music-lovers who, because of their particular musicality experience something spiritual – and for spiritual seekers and sensitive people who, because of their particular spirituality, have experienced a connection with music.’ Beckh believed a spiritual view of tonality would ensure music’s, and humanity’s, future. The author elucidates the correspondence of the circle of fifths (the keys) to the zodiac. Research should be directed towards the twelve vital, spiritual key-centres, as expressing the cosmic rhythms in which we all live, rather than the abstract twelve chromatic notes of atonality.

In The Parsifal Christ-Experience, Beckh’s original insights throw new and powerful light on the search for meaning in our age, for a knowledge of the heart. In the poetic libretto and remarkable music of his final creation, Wagner – acknowledged by Bruckner as ‘the Master’ – presents the Grail legend and its imagery. The psychological drama and its ultimate solution provide insights to anyone who is prepared to reflect on inner experience. Through Beckh’s references to Wagner’s own letters, as well as a remarkable letter from Nietzsche, the reader gains knowledge of the true nature of Wagner and his work.