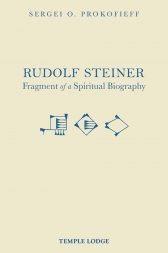 Underlying Sergei O. Prokofieff’s life’s work was a fundamental research-theme to which he returned to repeatedly: the individuality of Rudolf Steiner as manifested through his past incarnations on Earth. Beginning in 1982, inspired by a visit to an exhibition on The Epic of Gilgamesh, Prokofieff planned a full-scale spiritual biography with the intention of finding an answer to the question: Who is Rudolf Steiner?

In a sequence of five past incarnations – as indicated by Steiner himself – and culminating in the life of Rudolf Steiner, Prokofieff searched for the inner thread between the six stages of this great, all-encompassing life. His intention was to find not only the outer connections in this sequence but also the deeper, more esoteric stream that offers the key to the unique significance of this individuality.

In 1984, Prokofieff began to write the first chapter about Rudolf Steiner’s incarnation as Enkidu in Sumer. Sadly, many obstacles in his path were to prevent him finalising the project. However, the author returned to the book in his final months, preparing a Preface that outlines its conception together with a summary chapter on Rudolf Steiner’s evolutionary journey. This precious ‘fragment’ of a biography features valuable additional material, including: a full introduction to the relationship of the anthroposophical movement to other occult streams of esoteric Christianity and their Masters; a detailed spiritual-scientific interpretation of the Epic of Gilgamesh that establishes Rudolf Steiner’s connection with the being of Jesus of Nazareth, and an exploration of Steiner’s relationship to the Nathan soul, the Luke Jesus child.

Serious students of anthroposophy will welcome these final writings from the pen of one of Rudolf Steiner’s most faithful and insightful disciples.

SERGEI O. PROKOFIEFF (1954-2014) studied Fine Arts and Painting at the Moscow School of Art. He encountered the work of Rudolf Steiner in his youth, and soon decided to devote his life to it. He became active as an author and lecturer in 1982, and helped found the Anthroposophical Society in his native Russia in 1991. In Easter 2001 he was appointed a member of the Executive Council of the General Anthroposophical Society in Dornach, Switzerland, a position he held until his death. A popular speaker, he wrote numerous books and articles that are published in many languages.