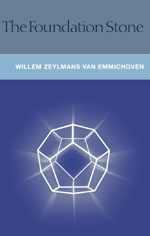 During the Christmas Conference of 1923-24 when the Anthroposophical Society was refounded, Rudolf Steiner presented to its members for the first time the Foundation Stone Meditation. On consecutive days during that week he showed how elements of the Meditation could be rebuilt into new meditations - sometimes referred to as 'rhythms' - which could be inwardly practised. Zeylmans van Emmichoven was present at that formative meeting, and lived intensively with these 'rhythms' for more than 30 years. He started speaking about them publicly at a time when they were virtually forgotten. Initially in the Netherlands, and later during his extensive journeys around the world, Zeylmans began to make people aware of the germinating forces contained within the Meditation. This volume bears the fruit of his work on this theme. It remains a seminal book which has been an inspiration to generations of students of anthroposophy.

"Anthroposophy can become fruitful in the world when a community of people is actively working with the Foundation Stone Meditation. When Zeylmans van Emmichoven revived this Meditation around the whole world, a process began through which the Anthroposophical Society itself, which has been through many conflicts and battles, could be healed again." - Joop van Dam

WILLEM ZEYLMANS VAN EMMICHOVEN, born in Holland in 1893, was a pupil of Rudolf Steiner. A medical doctor and founder of the Rudolf Steiner Clinic in Scheveningen, he was also General Secretary of the Anthroposophical Society in the Netherlands, in which capacity he attended the Christmas Foundation Meeting. Zeylmans also conducted important research into the influence of colours, the psychology of peoples and nations, and the psychology of the individual human being.