FROM CHRISTIANITY TO CHRIST 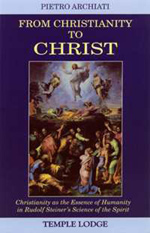 Archiati's warmth of expression and clarity of thought bring to life ideas and concepts which for so long have been the reserve of dry theology. It soon becomes clear that the theme of Christianity is relevant to us all as the very "essence of humanity"!